This is the second in a series of posts describing my personal experience of having laser eye surgery in February 2012. To start at the beginning, go back to the first post in the series.

On Friday February 3rd, before leaving home in the morning, I looked out of the front window to remind myself, for the last time, what my myopic self could see without glasses. Answer: not much. There are two road signs near my house, and I could see neither (just white blobs).  I went to work as normal, spent the morning tying up loose ends before leaving at about 3:30pm to head to my appointment at Moorfields. I work very close to City Road so was able to walk to the hospital.

Up to this point I hadn’t been particularly nervous – I’d read so many online stories from other laser correction patients, particularly those who had LASEK, the majority of which seemed to say ‘the procedure is quick, the recovery is very painful for a few days, and sight returns gradually over the course of a month’, so I was prepared. 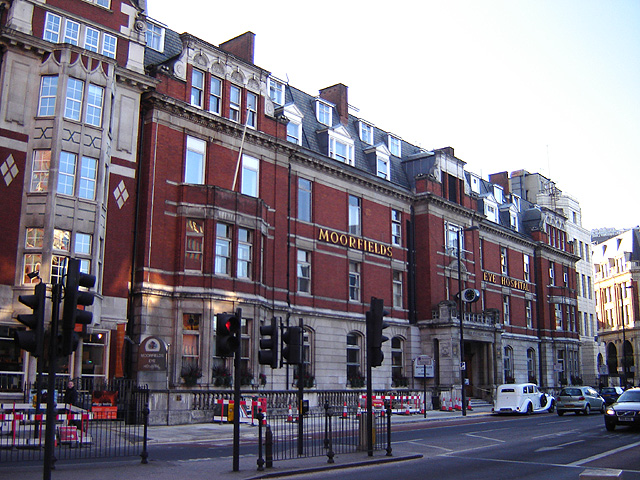 At Moorfields, which looks like that picture on the left, all the signs are reassuringly massive apart from the tiny, lengthy missive explaning why the lifts don’t stop on the 4th floor (where the refractive laser surgery clinic is). Having navigated the stairs I was shown into the ‘laser lounge’ which was actually just a waiting room with a coffee machine, some newspapers and a few other people each supporting a large pharmacy bag. No lasers. One chap was furiously thumbing on his blackberry – right up to the point of being called in for his procedure, asking ‘Can I just finish this email?’

A very chatty nurse took me to a very freezing room and, with a knowing smile, presented me with my own bag of ‘pain management’ drugs and eye drops – six different drops in total (anaesthetic for night time, dilating drop, anti-biotic, anti-inflammatory, painkiller, rehydration), not forgetting the sexy eye goggles that I have to wear for the first 6 nights to stop anyone punching me in the face whilst I sleep. There’s also a sinister-looking roll of masking tape which is not explained. My nurse tells me that I’m going to have a rubbish weekend but it’ll all be worth it in the end. Great.

Back in the waiting room, Blackberry man returns from his operation without his specs, picks up his briefcase and leaves – very matter of fact.

Then it’s my turn.

Now, I was hoping not to have to bring Rihanna into this, but the nurse in the treatment room was humming We Found Love, so conversation turned to vomiting ribbons. This was an unexpected but welcome diversion from the impending corneal zappage. I put down my glasses for the last time, and had numbing drops in my eyes. There were four people in the room, a large cream machine and a chair which looks like a dentist’s, and after about 2 minutes of being in the chair I was swung under the machine.

If you have a strong stomach, there are lots of clips on YouTube of PRK / LASEK which pretty accurately mirror what happened to my eyes. I’m not going to link to them as I only watched it after my procedure. Go ahead and search if you wish. Here’s the non-graphical graphic description.

My eyelids were taped back loosely, and a small clamp put in to keep my eyes open. This sounds horrendous but was no fuss at all, and meant that I could do tiny blinks without getting in the way of the business. The amount of moisture and anaesthetic on the eye surface stopped them feeling dry. An alcohol solution was poured onto my eye to loosen the top layer of the corneal epithelium. A titanium marker was put on the eye (presumably to line up the laser?) then the epithelium was then pushed to one side with a tiny tiny scalpel, before the alcohol was washed away. Then the laser fired for approximately 45 seconds, clicking like a toy gun as it flashed. It’s a bit like looking at HAL 9000 from 2001 a Space Odyssey but it doesn’t sing nursery rhymes (I’m sure you can pay extra for that). As the laser does its work things become more hazy which is not surprising. There’s nothing stopping me moving my eye but I didn’t, much, even though I was told that the laser will track my pupil if I move during the procedure.

Immediately afterwards there was a wash poured onto the newly-lasered cornea to prevent scarring, which made things totally blurry for a few seconds (it’s a little like looking at onion peel through a microscope), then that’s washed away, the surface cells are pushed back into place with the teeny scalpel, then another wash, then a contact lens is put in place to protect the eye surface, and then it’s on to the other eye. The whole thing was entirely painless and rather curious to watch; rather like a prototype for a CG animation sequence of time travel. Once one eye was complete I was totally relaxed about having the second one done as I knew it would not be painful. There was a very small smell, like potatoes left to boil dry (weirdly), at the very end of each laser firing but I didn’t find it upsetting at all.

Once it was over I sat up straight away. I could read the time on the clock on the wall and see the smiling faces of the nurse and assistants. It was fuzzy and misty and blurry but a marked improvement on my previous -7 prescription already. I’m a bit emotional at this point so it’s all a bit of a blur but I thanked the surgeon and he told me to make sure I keep my eyes hydrated with drops.

The nurse helped with the first set of anaesthetising and dilating drops, and warned that the pain would begin in around an hour once the main operation anaesthetic wore off. My eyes look totally normal aside from having enormously dilated pupils, so after donning sunglasses (even though it’s February and dark at 6pm) I got a Hailo cab home, as it was totally freezing.

The evening was spent in sunglasses and low light at home, drinking gin and tonic. Edgerton’s pink gin is my favourite at the moment, if you’re interested. The taste is much better than the branding.

I could read newspaper headlines on the coffee table from the sofa, and I can read text messages when I set the font size to 40pt. This is poor vision by anyone’s standards, but a huge improvement over my previous unaided vision. I have ghosting, fog and light sensitivity but, crucially, no pain. Putting in eye drops every 15 minutes is a pain, comically annoying in fact, so much so I begin thinking about starting a niche business selling headbands with tiny optics on which drain directly into the eye. Overall I felt happy to have survived with only minimal discomfort though.

And so to bed, in sexy goggles. Here’s what they look like.

Last Friday, 3rd February I had LASEK surgery on my eyes to correct my short-sightedness. I’ve been writing a little diary of my experience since, because I found others’ experiences online enormously helpful in deciding to go ahead with the procedure.

I’ve been a bespectacled fellow since the age of seven. Being able to see the blackboard in class was brilliant. No more squinting! But, of course, children are cruel, and especially in the early years, my extra pair of eyes caused much ridicule.

On the left is a pic of me in my second or third pair of glasses. I think I’m about 10, posing in the back garden with my mum before going to my aunt’s wedding. Mum chose not to wear her glasses (which we called her Deidre Barlows – now trendy again in Shoreditch) for this shot.

Thankfully this was some years before Harry Potter, otherwise I would most definitely have had a lightning bolt carved into my head by the other kids in school.

When I was fifteen I pleaded with my parents to let me wear monthly contact lenses, and as my sister had been wearing them for around four years they relented. At that point I think the prescription in both eyes was around -5. To start with it would take me a full half hour just to get the soft lenses in and out of my streaming eyes, but after a few months it became pretty natural.

Aged 28, and with a pretty stable -7 or thereabouts in both eyes, I found it increasingly difficult to wear contact lenses – I would regularly have bouts of sore eyes or blepharitis with monthly lenses, leaving me dependent on dailies (I have an astigmatism too, so they end up being at least £1.50 a pair). I run a fair bit, and go to the gym, and glasses always slide off my nose when I get sweaty, so it’s a bit of a pain.

I went for a free consultation at a local Optical Express store back in November 2011 to discuss having lasers fitted. The bad news, they told me, was that I wouldn’t be able to cut shapes in ice or levitate objects. The good news was that I was a suitable candidate for LASIK, having thick corneas. I came home unable to see properly after having a serious amount of dilating drops in my eyes. A week or so later I received a phone call offering me the procedure for around £350 less than the initial quote, and a further reduction of £700 was possible if I could be flexible about my dates. Like all providers they offer interest-free credit too.

I felt pretty excited at that point – but also a bit weirded out by the aggressive sales policy. In January 2012 I went for a private consultation at Moorfields Eye Hospital – not free this time (£100), and mostly involved the same set of tests, but the interpretation was different. The consultant explained I was not a suitable candidate for LASIK as my corneas are particularly elastic, and therefore LASEK (aka PRK) is the only option. I had already read quite a lot about the differences between the two techniques.

Later I learned that this conflicting story was the result of Optical Express practice of using non-surgeons to interpret scan results – in all likelihood, if I’d gone with Optical Express, the surgeon would have spotted this on the day of surgery and switched me from LASIK to LASEK. This happens to a small number of people, including my friend Hugh. Given that the recovery time for LASIK is generally 48-72 hours, vs around a week for LASEK, I’d be pretty annoyed to learn of the change of plan on the day.

After some thought and reading up on the difference between the procedures, I took the plunge and booked in at Moorfields on Friday 3rd Feb, and as LASEK takes some time to recover from, I also took the following week off work.

In the next post I’ll describe the day of the procedure. I’m writing this on Day 4 of the recovery and my eyes are hurting fron the strain of typing this in!

I’m currently studying for an MBA with the Open University, part time. I’m also a singer with the Pink Singers, and sometimes I tweet.

I’ve had this blog, on and off, since 2000, so some of the archives contain posts written for different audiences / reasons. Your mileage may vary!